Coming at you again with a list of titles that are available as of today! Pick them up from your local bookstore, order them online, add them to your Goodreads list.

The Trial of Lizzie Borden by Cara Robertson

The Trial of Lizzie Borden tells the true story of one of the most sensational murder trials in American history. When Andrew and Abby Borden were brutally hacked to death in Fall River, Massachusetts, in August 1892, the arrest of the couple’s younger daughter Lizzie turned the case into international news and her trial into a spectacle unparalleled in American history. Reporters flocked to the scene. Well-known columnists took up conspicuous seats in the courtroom. The defendant was relentlessly scrutinized for signs of guilt or innocence. Everyone—rich and poor, suffragists and social conservatives, legal scholars and laypeople—had an opinion about Lizzie Borden’s guilt or innocence. Was she a cold-blooded murderess or an unjustly persecuted lady? Did she or didn’t she?

The popular fascination with the Borden murders and its central enigmatic character has endured for more than one hundred years. Immortalized in rhyme, told and retold in every conceivable genre, the murders have secured a place in the American pantheon of mythic horror, but one typically wrenched from its historical moment. In contrast, Cara Robertson explores the stories Lizzie Borden’s culture wanted and expected to hear and how those stories influenced the debate inside and outside of the courtroom. Based on transcripts of the Borden legal proceedings, contemporary newspaper accounts, unpublished local accounts, and recently unearthed letters from Lizzie herself, The Trial of Lizzie Borden offers a window onto America in the Gilded Age, showcasing its most deeply held convictions and its most troubling social anxieties.

House on Fire by Bonnie Kistler

Divorce lawyer Leigh Huyett knows all too well that most second marriages are doomed to fail. But five years in, she and Pete Conley have a perfectly blended family of her children and his. To celebrate their anniversary, they grab some precious moments of alone time and leave Pete’s son Kip, a high school senior, in charge of Leigh’s fourteen-year-old daughter Chrissy at their home.

Driving back on a rainy Friday night, their cell phones start ringing. After a raucous party celebrating his college acceptance to Duke and his upcoming birthday, Kip was arrested for drunk driving after his truck crashed into a tree. And he wasn’t alone—Chrissy was with him.

Twelve hours later, Chrissy is dead and Kip is charged with manslaughter.

Kip has always been a notorious troublemaker, but he’s also a star student with a dazzling future ahead of him. At first, Leigh does her best to rally behind Pete and help Kip through his ordeal. Until he changes his story, and claims that he wasn’t driving after all—Chrissy was, and he swears there is a witness.

Leigh is stunned that he would lie about such a thing, while Pete clutches onto the story as the last, best hope to save his son, throwing his energy and money into finding this elusive witness. As they hurtle toward Kip’s trial date, husband and wife are torn between loyalty to their children and to each other, while the mystery of what really happened that night intensifies.

This richly conceived and tightly plotted psychological exploration of family and tragedy will have you racing toward its shocking and thought-provoking conclusion. 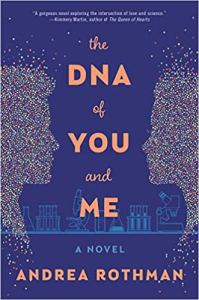 The DNA of You and Me by Andrea Rothman

How does smell work? Specifically, how do olfactory sensory neurons project to their targets in the olfactory bulb, where smell is processed? Justin McKinnon has hired fresh-faced graduate student Emily to study that question. What Justin hasn’t told Emily is that two other scientists in the lab, Aeden and Allegra, are working on a very similar topic, and their findings may compete with her research.

Emily was born focused and driven. She’s always been more comfortable staring down the barrel of a microscope than making small talk with strangers. Competition doesn’t scare her. Her special place is the lab, where she analyzes DNA sequences, looking for new genes that might be involved in guiding olfactory neurons to their targets.

To Emily’s great surprise, her rational mind is unsettled by Aeden. As they shift from competitors to colleagues, and then to something more, Emily allows herself to see a future in which she doesn’t end up alone. But when Aeden decides to leave the lab, it becomes clear to Emily that she must make a choice: follow her research or follow her heart.

A sharp, relevant novel that speaks to the ambitions and desires of modern women, The DNA of You and Me explores the evergreen question of career versus family, the irrational sensibility of love, and whether one can be a loner without a diagnostic label.

Me for You by Lolly Winston

The last thing Rudy expected was to wake up one Saturday morning, a widow at fifty-four years old. Now, ten months after the untimely death of his beloved wife, he’s still not sure how to move on from the defining tragedy of his life—but his new job is helping. After being downsized from his finance position, Rudy turned to his first love: the piano. Some people might be embarrassed to work as the piano player at Nordstrom, but for Rudy, there’s joy in bringing a little music into the world. And it doesn’t hurt that Sasha, the Hungarian men’s watch clerk who is finally divorcing her no-good husband, finds time to join him at the bench every now and then.

Just when Rudy and Sasha’s relationship begins to deepen, the police come to the store with an update about Rudy’s wife’s untimely death—a coworker has confessed to her murder—but Rudy’s actions are suspicious enough to warrant a second look at him, too. With Sasha’s husband suddenly reappearing, and Rudy’s daughter confronting her own marital problems, suddenly life becomes more complicated than Rudy and Sasha could have imagined.

With Winston’s trademark humor and sweetness that will appeal to readers of Jennifer Weiner and Fredrik Backman but is uniquely her own, Lolly Winston delivers a heartfelt and realistic portrait of loss and grief, hope and forgiveness, and two imperfect people coming together to create a perfect love story.

I'm an avid reader passionate about grammar and in favor of the Oxford comma. I will be sharing what I'm currently reading along with reviews and recommendations. If you have any questions, please email me at micheleh34@gmail.com View all posts by theoxfordcommamomma